Annabel Nettleton marries impulsively and gives birth to a son, but she soon begins to suspect her husband Dylan is not the romantic and wonderful man she thought she'd married. When a private investigator specializing in locating missing heirs shows up at the Nettletons' California home, Dylan is far from overjoyed at the prospect of inheriting millions. Instead, he turns violent, directing his unexpected rage at his wife.

Soon Annabel's troubles begin to multiply. She finds herself accused of murder, a little boy is kidnapped, and she comes close to dying in an arson fire. The complex plot grows more and more suspenseful as Annabel scrambles to learn the secrets of Dylan's mysterious past, to clear her name, and to save the kidnapped youngster...all while her own life and that of her young son are in constant peril.


RICOCHET is a finalist for the 2004 Mary Higgins Clark Award, given by the Mystery Writers of America. 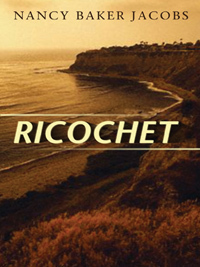